Finally one of the most influential Japanese animations in being adopted into a live-action. Yup, Ghost in the Shell is being made into a potential Hollywood Blockbuster. Surprisingly the movie is getting attention even before it hit the movie theatres due to a rather big controversy.

Scarlett Johansson is to play the role of cyborg Major Motoko Kusanagi. The internet went into a  franzy, accusing Hollywood of Whitewashing. The American movie industry has been known for whitewashing pretty much since movies were being made, with whites often being cast to play the roles of black, Native Americans, Arabs, and even Orientals:

Mickey Rooney as I.Y. Yunioshi in Breakfast at Tiffany’s (1961) 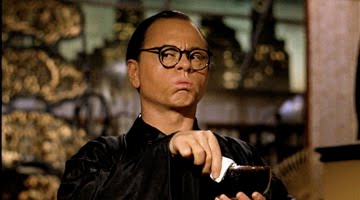 What the F…? WHY? You just totally ruined my childhood! Yeah, because I bet there are, like, NO Korean actors that could have actually played the part…

Sadly it’s a very long list and I just scrapped the very tip of this voluminous iceberg. At any rate Hollywood is getting a lot of backlash for casting ScarJo for a role that should be played by an Asian actress. To make matters even more ridiculous it’s rumoured the caucasian actress is going to be adorned with some makeup and re-tweaked with CGI to make her look more Oriental.

Fans of the franchise were infuriated, some even compiled a list of Asian actresses, including the kickass Rinko Kikuchi who can actually make a very decent Kusanagi. Don’t get me wrong, I think ScarJo is a great actress, plus she already proved herself as an action babe by portraying the Black Widow and Lucy. The actual problem is that ScarJo is more of a brand-name and an eye candy in the movies she stars in, which is exactly why she was hired to play the role of Motoko Kusanagi. Now, while A WHOLE LOT OF PEOPLE will tell what’s wrong with casting ScarJo for the role (just check the internet) I’ll tell you why it’s sort of right.

First, ScarJo is a brand name. Yup, there you have it. Unfortunately I cannot think of one Asian female actress that has the same huge international fan-base as her. Sad but true. There are plenty of famous Asian actresses, but the problem is they’re all famous in ASIA… The movie industry is first and foremost a money making industry, and yes, they can take a chance and cast a legit Asian woman to play the part, but in that case only fans of Ghost in the Shell will buy a ticket to see the movie, which essentially means losing money. With ScarJo as the lead more people will watch the movie, even if they’ve never heard of Ghost in the Shell. As always it’s all about the money…

Second, it brought the whitewashing issue to the surface on a scale never seen before. Yup, it’s not ScarJo’s fault, in fact it’s a little hard to tell at whom to point the finger at, quite frankly. Hell, maybe it’s even the fault of the audience — i.e. us. Perhaps WE should show more interest in watching international movie with non-white actors, huh? This is a two-way street. Anyhow it’s a good thing that this happened because as a result there is a greater awareness with what is wrong with the movie industry. The more people talk about this and point out what is wrong, along with actually doing something about it, like, I don’t know, insisting on casting more minorities for leads, the more likely things like whitewashing will become less frequent.

My final argument when it comes to ScarJo in Ghost in the Shell: Yay!! They’re finally making a (potentially very good) movie out of it!!! Okay, look, they paid her a TON of money to star in the movie, which is why she agreed, most probably. If they can afford to pay her so much in means they have the money to invest in the live-action adaptation to make it a quality film. I know I want to watch it, even with ScarJo as  Kusanagi, as bottom line is that the franchise is AMAZING: it’s smart, original, visually appealing, and rises very interesting existential questions. More anime should be adapted into movies and I’m not talking about the Attack on Titan type of cinematography adaptation… Anime should get the respect and international attention it deserves, especially with cult classics like Akira, Spirited Away… and the list goes on.

The solution is most probably to be more sensitive to race issues, as well as more respectful: cast the proper actors, invest money, and lastly we as audience should also be more open minded.

Bottom line is that you can go and watch Ghost in the Shell when it comes out, or you can opt-out, the choice is yours. Either way, hopefully, the ScarJo debate will bring some positive changes into the movie industry in the future.