Howard Phillips Lovecraft, born 1890 in Providence, Rhode Island is generally referred to as one of the founding fathers of Science Fiction (and steam punk), with his most monumental work being ‘The Call of the Cthulhu’.

Being somewhat of a weirdo and an eccentric, Lovecraft had a bias towards the overly dramatic, strange, nether-worldly, alien, and outright bizarre. He was known to write mostly during the night-time, as he was — as cultured and sane people should — sleeping during the day.

It is said that great genius is often born out of a great tragedy, and it was no different in our sci-fi writer superstar’s case.

Lovecraft’s dad, Winfield – the traveling jewellery seller — sort of lost his mind at some point. Rumour had it that the man was getting some nookie on the side, which resulted in him contracting the syphilis. Sadly he succumbed due to muscle dystrophy at the Providence psychiatric institution.

Luckily enough for Howard and his mama the family was not left destitute. The strapping young lad was brought up by his doting aunts, and loving grandfather, Whipple.

Whipple notices that the boy had an uncanny aptitude for reading, writing, memorizing, and reciting poetry. This prompt Whipple to give the boy a bunch of not very child appropriate books to read.

Aside from being super-duper smart, Howard also suffered from pretty horrible night-terrors, sleep paralysis, and a very severe case of highly vivid imagination.

So all these super weird tales of Lovecraft you ever read: all the surreal landscapes, outer space beings, and of course the ‘madness’ (the running theme in all of his stories), yup, ALL THAT was inspired by his ludicrously imaginative and delirious  mind.

At any rate I decided to make a small list of all the things that are the traditional staple in a Lovecraft tale, so read on and pay some respect to one of the masters of horror:

5) The Young Man, aka the protagonist

Our young man is usually of the New England stock, which automatically makes him trustworthy, logi

cal, and honest. Often a student, and even more often than that an assistant to a professor, doctor, or a mad scientist. At times he might be conducting some reaserches himslef. When he’s not doing that you can find him riding his ever trusted bicycle from point A to point B. The Young Man is not exactly mild-mannered, but he is polite. He is skeptical, albit curious (think agnet Fox Mulder). This often lends him in very dangerous situations. Our protagonist usually starts his tale claiming that he wants, nay MUST tell us of the hideous events/ terrors that his otherwise lucid mind had been the victim of. Sometimes he can also be the outcast, sickly, aristocrat. 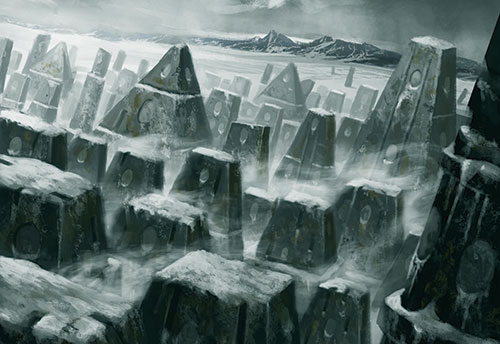 Lovecraft was obsessed with geometrical shapes and madness. First came the madness, then the geometrical forms, sometimes the other way round, but most often they coincided and co-existed: one enticing the other. Was his fascination related to some personal experience? Remember his dad, Winfield? Well, Winfield died of insanity (sort of), thus it only makes sense that the highly unpleasant memories of the past have rooted themselves deep into Lovecraft’s subconsciousness. As for the geometrical shapes? Perhaps he knew something we didn’t…

3) Aboriginals, or the native locals

In Lovecraft’s defence he did not live in the most politically correct of times… Yet he was a highly educated, and fairly open-minded individual. Don’t be surprised to find offensive words like ‘primitive’, ‘primal’, ‘undeveloped’, ‘ape-like’, and etc… In his works. In the good old times of the 19th and all the way until the mid 20th century there was a clear underst ading of what was culturally advanced and what was, well, not. While anthropolgiests enjoyed travesring rain forests, the arctic, ancient caves, and observe anceint cult rituals. Eqaully eager static explorers devoured all those findings in the written form. Back in the day travel was not as possibly or widely effordable as it is today. In fact, the only way people could find out about what was going on over the Pacific and the Atlantic was via readings. Unfortunantely White Supremecy was the unqestioanble force and standard at the time, which made pretty much everyone sound like a big, ol’ racist. Lovecraft wrote in the sceintific spirit of the time, nothing more. But I think that all in all he was an overall nice guy. Most of the ancient curses he was writing about were brough upon by ancient cults, usually worshipped by men-eating aboriginals.

Ah, outer-space, still such a mystery. According to many early sci-fi writers this was where evil things came from; evil thing

s that wanted to steal our brains and pickle them in jars *sad smiley face*. When Lovecraft wasn’t blaming ancient rain forest tribes for awakening ancient evil and unleashing it on the perfectly civil Western Civilization he blamed aliens for all sorts of wicked things. Aliens were always kind of heinous, and they always resided in cave, preferably New England caves. They also resembled insects. Sometimes they made penguins mutate. Go figure… If all else failed write something about an ancient alien race found frozen in the arctic, in an undergroun geometrically shaped temple worshipped by the local indigenous population.

1) The House and the Ancient Family Curse

Old houses and ancinet curses are as much a staple of gothic literature as explosions and a Michael Bay movie. House of Seven G

ables, Fall of the house of Usher, The Monk… Houses and curses are the bread and butter of the gothic novel: for without the house there will be no curse, and without that there will be no novel. As a child
Lovecraft was too sickly to attend schools without long intervals, thus he spent a lot of his time reading tales of horror and the macabre. Wanna know Lovecraft’s secret? f(x)= a house + curse + unsuspecting young man. Eureka!